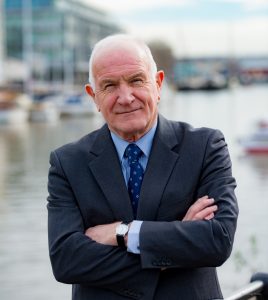 John Savage joined the New Room board of Trustees as Chair in October 2018.  He recalls when he first came across the New Room, nestling serenely in the midst of Broadmead:

“The death of my father soon after the end of the Second World War, a drawn-out process from the outcome of his Royal Navy service, pushed my mother and her two children into a return to her own parents’ home in the bomb-damaged slums of Woolwich in South London. My brother was eight and I was young enough to have now no recollection of my dad at all.

The house was made up from one half of a converted eighteenth-century inn, located about 200 yards from the gates of the Woolwich Dockyard. It had no electricity, was lit by gas mantles and the only water supply was a cold tap with an earthenware sink housed in a lean-to at the rear of the building. It had an outside water closet a hundred feet or so from the back door. The winters of the late 1940s were very cold and ice on the inside of bedroom windows was a normal feature. General heating was from a coal-fired kitchen range and infrequent coal fires in the hallowed ‘front room’ on special occasions. It was the time of smog before the Clean Air Act was introduced and the winter atmosphere was poisonous. Serious chest infections were a mark of our lives and I know that I live with the after-effects to this day.

I was educated at the local Church of England primary school and then at St Olave’s and St Saviour’s Grammar School for Boys in London. I was involved in the church choir and as an altar boy from a very early age and my parish priest convinced my mother that I was called to the priesthood. I was not clever enough to grasp the then mandatory knowledge of Latin and Greek and we could not afford for me to stay in education. I went to work at sixteen to help with the family finances and got on well in business.  I gained management and directorship experience over more than fifty years in a broad range of companies.

From 1989 I became Chief Executive of The Bristol Initiative., asked to create a bridge between the business community of Bristol and its very left-wing Council where there had been a complete absence of dialogue or cooperation for many years.  The City was deteriorating. The Council was characterised by business as “the looney left” and business, epitomised by the Society of Merchant Venturers secure in the leafy suburb of Clifton, was seen as rapine and pillaging.  The magnitude of the task was to just create dialogue but more about the need to understand and deliver the potential future for the City and to see any hopefulness for it and its people.

We instigated a series of public/private partnerships with the Council and provided help and resource for such diverse challenges as building the Matthew to celebrate a 500-year anniversary to guiding the regeneration of the old city docks.  One of the challenges was the need to save the Broadmead shopping area from destruction by a proposed out of town development and as chairman of the Broadmead Board I discovered to my surprise and great delight the existence of the New Room nestling serenely in the midst of run-down commerce.  John and Charles Wesley had been important to me in developing an understanding of my faith and it is now the greatest privilege, particularly as a lay Canon in the Church of England, to have been permitted to chair the Trust and to help ensure that its vital message of hope is clearly available to all who might see.

I kept my faith, have treasured it and tried to let it show in a very secular environment and a darkening world.”

Your ticket for: John Savage – Chair of Trustees