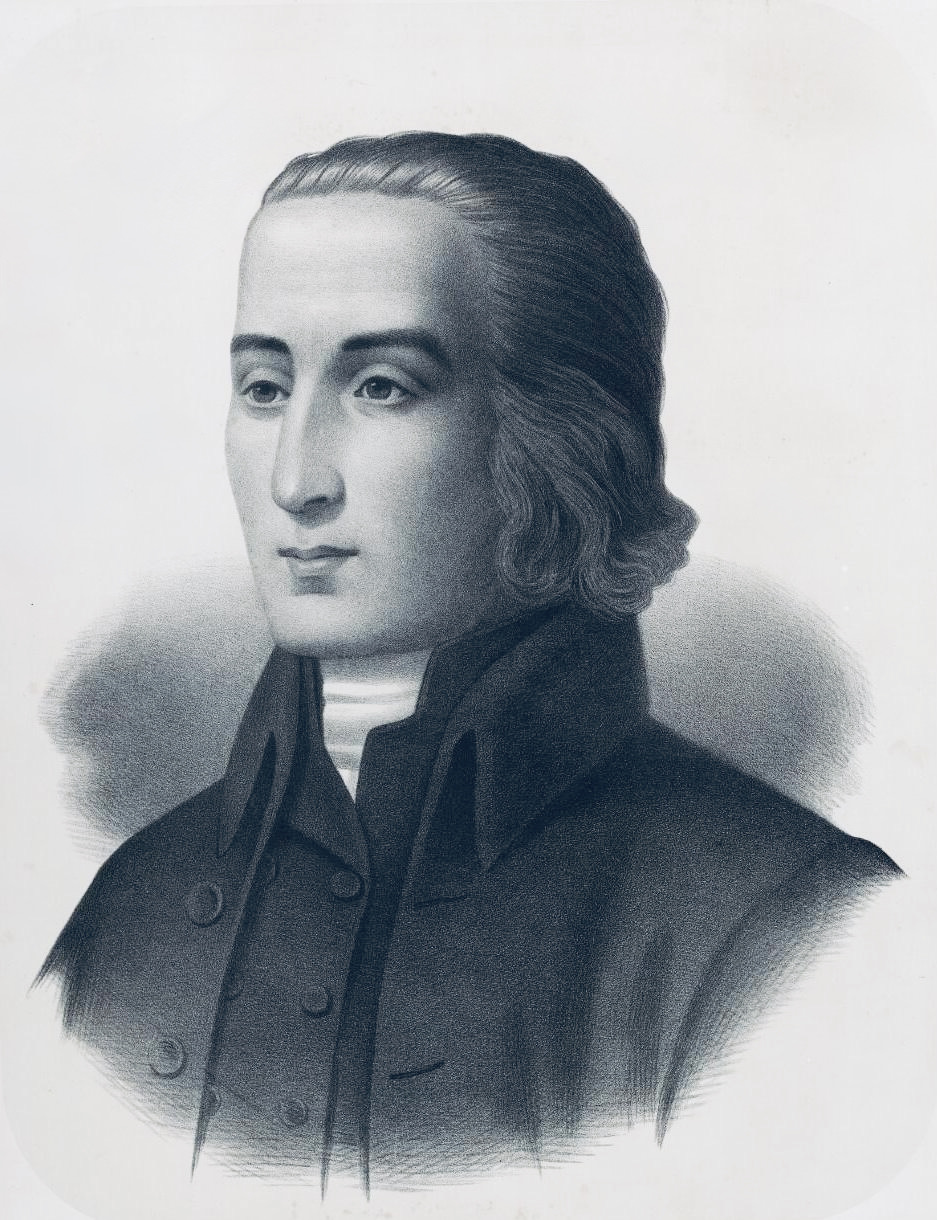 Guide me, O thou great Redeemer,

Pilgrim through this barren land;

I am weak, but thou art mighty;

Hold me with thy powerful hand:

Feed me till I want no more.

Feed me till I want no more.

Open thou the crystal fountain

Whence the healing stream shall flow;

Lead me all my journey through:

Be thou still my strength and shield.

Be thou still my strength and shield.

When I tread the verge of Jordan,

Death of death, and hell’s destruction,

Land me safe on Canaan’s side:

I will ever give to thee.

I will ever give to thee.

Guide Me, O Thou Great Redeemer’ was written by William Williams, one of the key leaders of the eighteenth-century religious revival in Wales. Born in 1717 in a village near Llandovery, Williams was the son of a prosperous farmer. He was educated at Llwynllwyd Academy, near Talgarth with a view to becoming a doctor, but listening to the preaching of the evangelist Howell Harris in 1738 led him instead to seek ordination in the Church of England:

This is the morning, still remembered

That I first heard heaven’s sound.

By a summons straight from Glory

With his voice my heart was bound.

Ordained in the first instance as a deacon he commenced working as a curate in 1740 and joined the newly created Methodist movement to which Howell Harris belonged. This was an evangelical group within the Church led by three clergymen, John and Charles Wesley and George Whitefield. Many clergy viewed the Methodists as politically and religiously suspect and in 1743 Williams was denied ordination as a priest and sacked from his role as a curate. Williams then became a lay preacher within the Calvinist branch of the Methodist movement. For over forty years he travelled extensively around Wales, preaching and organising fellowship groups. It is estimated he travelled an average of 2,230 miles a year, although there were very few good roads and as yet no railways. It was a hard life and at times a dangerous one because of the aggressive hostility shown towards Methodists. On one occasion a mob beat him to within an inch of his life. Only his faith in God kept him going :

A pilgrim in a desert land,

I wander far and wide,

Expecting I may sometime come

Close to my Father’s side.

Ahead of me I think I hear

Sounds of a heavenly choir,

Through tempest flood and fire.

Pillar of cloud by day:

Lead for I dare not take a step

Unless Thou show the way.

So prone am I when on my own

To stray from side to side

I need each step to Paradise

My God to be my guide.

I have a yearning for that land

Where the unnumbered throng

Extol the death on Calvary

One of the reasons why the Church opposed Methodism was because the movement promoted hymn-singing and the Church held that only texts from the Bible (such as the psalms) should be sung. Williams became a prolific writer, publishing around 90 books and booklets, and, as a Methodist, he defiantly wrote over 900 hymns, mostly in Welsh. Those who responded to his hymns dubbed him ‘the sweet singer’. Many of Williams’ verses came to him when he lay in bed at night, and so he always kept a pen, ink, paper and a writing board by his bedside. It is thought he raised the money to publish what he wrote by selling tea on his travels. Today he is described by scholars  as being the greatest of all the Welsh poets because of the hymn and poems he produced. Williams laid down four guidelines for other would-be hymn writers: to seek and experience God’s saving grace for themselves, to study as many poems as possible so as to understand what made for excellent verse, to particularly read the sections of the Bible that were rich in poetry, figurative speech, and spiritual analogies, and to only compose when under the influence of the Holy Spirit.

What we now call ‘Guide me, O thou great Redeemer’ was originally entitled ‘Arglwydd, arwain trwy’r anialwch’ and it was entirely in Welsh. It was written in 1745 not long after Williams had embarked on his itinerant life and it is all about how he will look to God to guide him through a life filled with danger, disappointments, and uncertainty. He uses the Exodus story of how God protected the Israelites in their desert wanderings as evidence that God can be trusted. The irreligious world in which he lived felt like the ‘barren land’ of the desert but he was sure God would guide him through whatever he had to face just as he had guided the Israelites, providing them with a pillar of cloud by day and a pillar of fire by night. God would also provide him with the spiritual nourishment he needed just as he had fed the Israelites with manna (the ‘bread of heaven’) and with water from ‘the crystal fountain’. This last phrase was coined by Williams because there is a passage in the Book of Revelation that speaks of ‘the river of the water of life, as clear as crystal, flowing from the throne of God’. What had he to fear? Death? Hell? There was no need. Just as God had eventually led the Israelites across the River Jordan into Canaan, their Promised Land, so he would help all Christians on the verge of death to cross over to a life eternal in Heaven. The hymn ends with a vow to endlessly sing songs of praise to God just as the Israelites had done.

The hymn resonates with so many people because life at times inevitably brings with it difficulties and people welcome the hymn’s message that, if we look to God, he will see us through them. Although the imagery used is from an Old Testament story, it is easy to link those images with the words of Jesus:

I am the Good Shepherd… I am the way, the truth and the life…I am the Bread of Life, no one coming to me never shall hunger…Whoever drinks the water I give them will never thirst… it will become in them a spring of water welling up to eternal life… In my Father’s house there are many mansions and I am going there to prepare a place for you.

Williams’ hymn was first published in 1747 but it achieved a much wider audience when three of its five verses were translated into English in 1771 by Peter Williams, another Welsh Methodist itinerant preacher, who later went on to produce the first Biblical commentary and the first Bible concordance to be published in the Welsh language. The two men having the same surname is just a coincidence. In his translation Peter Williams used the word ‘Jehovah’ for God but today most hymnals have replaced that with the word ‘Redeemer’ and some have also modernised old-fashioned words like ‘thou’ and ‘thy’. Williams entitled the translated hymn ‘A prayer for strength to go through the wilderness of the world’, but many people soon began calling it ‘Bread of Heaven’ after the phrase found in the first verse.

Much of the hymn’s subsequent popularity rests on ‘Cwm Rhondda’, the tune to which it is now sung. However, it did not acquire that tune until 1907. It was written by a Welshman named John Hughes. Born in 1873, he grew up in the Pontypridd area where there were a large number of English-speaking industrial workers. He started working in Glynn Colliery at the age of twelve but later found employment on the Great Western Railway as a clerk. Hughes was not a Methodist but writing hymn tunes was his hobby and he was a deacon and organist at the Salem Baptist Church in Llantwit Fardre. In 1905 he produced a tune which he subsequently developed for the inauguration of a new organ at Capel Rhondda, in Hopkinstown in the Rhondda valley in 1907. He  named the tune ‘Rhondda’ but this was subsequently changed to ‘Cwm Rhondda’ when it was discovered that another composer had already used ‘Rhondda’ as a hymn tune title. ‘Cwm’ is Welsh for a steep-sided hollow at the head of a valley. The perfect match of words and music soon made the hymn become a favourite choice of Welsh male-voice choirs and it was sung by Welsh regiments in the trenches in the First World War.

The tune first appeared in an English hymnal in 1933 when it was included in a new Methodist Hymnbook and in 1941 it achieved a world-wide audience when it featured prominently in the Academy Award winning film ‘How Green Is My Valley’ directed by the hugely talented John Ford. Ten years later  it was used again in another great film – this time sung by Kathryn Hepburn in‘The African Queen.’ The hymn has established itself as a kind of Welsh national anthem and it is often sung at weddings and at important sporting events, especially at rugby matches. It has also found favour as a hymn for big state occasions, especially those involving royalty. For example, it was sung at the funeral of Princess Diana in 1997 and of the Queen Mother in 2002, and it was sung at the weddings of Prince William and Catherine Middleton in 2011 and of Prince Harry and Meghan Markle in 2018. It is the only Welsh hymn to have acquired widespread popularity across the entire English-speaking world.

Your ticket for: Guide Me O Thou Great Redeemer