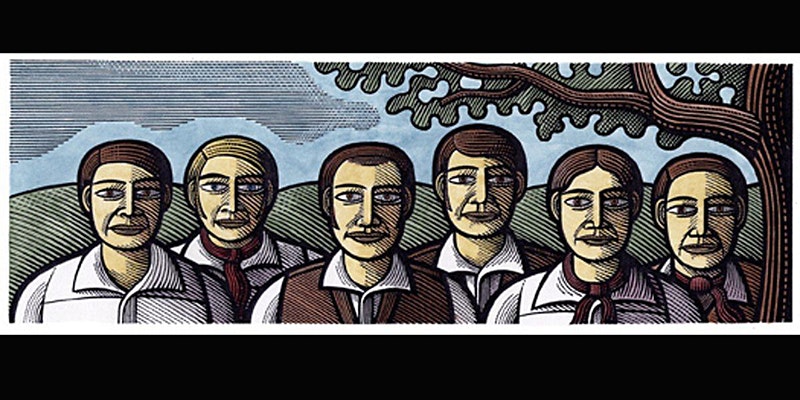 Explore how six agricultural workers in the 1800s became a popular cause for the early union and workers’ rights movements.

The Tolpuddle Martyrs were six agricultural labourers from the village of Tolpuddle in Dorset, England, who, in 1834, were convicted of swearing a secret oath as members of the Friendly Society of Agricultural Labourers. Some of them were also Methodists.

They were arrested on charges under an obscure act during a labour dispute against cutting wages before being convicted in R v Loveless and Others and sentenced to penal transportation to Australia.

They were pardoned in 1836 after mass protests by sympathisers and support from Lord John Russell and returned to England between 1837 and 1839. The Tolpuddle Martyrs became a popular cause for the early union and workers’ rights movements.

Join us to explore how the story of the Tolpuddle Martyrs can still speak today.

Our panel will feature Simon Topping (minister in the Gloucestershire Circuit) and Steph Jenner ( former minister of Tolpuddle Methodist Church).

Revd Simon Topping is currently working in the Gloucestershire Circuit and has been a Methodist Presbyter for over 30 years, with appointments also in Birmingham, south London and Argentina. He has been involved in two pilgrimages to Tolpuddle and two long distance marches to G7 summits as part of the campaign to cancel poor country debt. Simon was a co-founder of the Green Cross Co-op, a Christian workers’ co-op based in Gloucester. In September he became the Superintendent of the North East Somerset and Bath Circuit.

Revd Steph Jenner is a supernumerary Methodist minister, retired early due to ill health. Before this she was the Superintendent Minister of the Bridport and Dorchester Circuit, now Dorset South and West Circuit with Weymouth and Portland. Here she had responsibility for the current Methodist Chapel at Tolpuddle but was also one of the founding members of the Tolpuddle Old Chapel Trust (TOCT) which bought, preserved and is restoring the original chapel in the village. Active at the annual Tolpuddle festival they secured wider Methodist participation over the last 8 years including making it a necessary diary date for each new Methodist President and Vice president.

Everyone joining us for this Wes Talk will receive Zoom details on the day of the event. You will also be able to ask questions during the event if you wish via a Q&A session at the end.

Register for Event: Wes Talks Online – The Tolpuddle Martyrs: how does their story still speak today?

Your ticket for the: Wes Talks Online – The Tolpuddle Martyrs: how does their story still speak today?