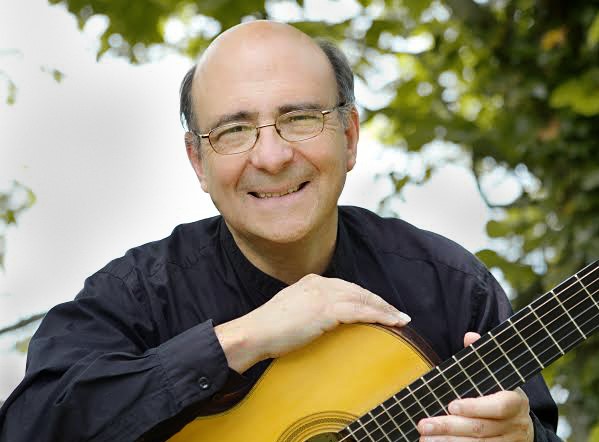 American classical guitarist and chamber musician Harris Becker has had a rich and varied career as a guitarist and lutenist across the world.  Harris is in Bristol as he is leading a master class for Bristol Classical Guitar Society and joins us for a programme of Bach, Albeniz, Granados and Savage as well as some new pieces by American composers.  Find out more about Harris here.

Join us at 1.30pm for a free lunchtime recital in the beautiful acoustics of the 18th Century Chapel.

As a young musician studying the classical guitar Harris Becker had a fascination with improvisation, which led him to explore jazz. He also had a strong interest in contemporary music, which offered him the opportunity to work closely with composers and premiere many solo and ensemble pieces throughout his career. Among the composers who have dedicated works to him are Carlo Domeniconi, Hayley Savage, Raoul Pleskow, Howard Rovics, microtonal composer Johnny Reinhard, Alan Hirsh, Michael Frassetti, Joseph Russo and Richard Iacona. His teachers have included Michael Lorimer, Jerry Willard, Dennis Koster, jazz guitarist Edward Stevens and cellist David Wells.

Becker has performed extensively both as a soloist and chamber musician giving concerts and master classes throughout the United States, Europe, South America, Mexico, Asia and Canada. In the fall of 2014 Mr. Becker gave concerts and master classes in Thailand and throughout Vietnam including at the U.S Consulate in Saigon. In the spring of 2015 “The Amaryllis Project” (world-renowned pipa virtuoso Liu Fang and Harris Becker) gave a concert of six world premieres for pipa & guitar at the Long Island Guitar Festival, which included a new work by Carlo Domeniconi. Mr. Becker will be featured playing the lute music of John Dowland in a forthcoming documentary “Shakespeare in New York” directed by Peter Josyph.

In 1993 Mr. Becker founded the Long Island Guitar Festival, of which the New York Times wrote: “The “Long Island” in the festival title clearly refers to its location and origins, rather than to its scope”(2014). Harris Becker is Director of Guitar Studies at LIU Post and has been a faculty member at Nassau Community College, The Aaron Copland School of Music at Queens College and Director of Music for Mixed Ensembles at the International Institute for Chamber Music at the Richard Strauss Conservatory in Munich. The Florida State Division of Cultural Affairs selected Mr. Becker to participate in Florida’s Artist Residency Program, giving lecture/performances on the lute and baroque guitar. He recently received an award for outstanding service from the School of Visual and Performing Arts at Long Island University. Mr. Becker is also a member of the Artesian Guitar Quartet.

Harris Becker is co-founder and artistic director of the summer music festival in rural Quebec “Songe d’été en Musique”. In 2015 the festival celebrated its tenth anniversary, which featured the Youth Orchestra of the Americas. This concert was called “historic” by the press in Quebec. His recordings include “Catgut Flambo” with guitarist Pasquale Bianculli, a solo CD “Passing Through” and a CD with the “Artesian Guitar Quartet.” In the spring of 2017 he released new first recordings of music by John Lessard, Noel Zahler and Michael Frassetti. His editions and publications are published by T.D. Ellis Music Publishing and Calavar Music.