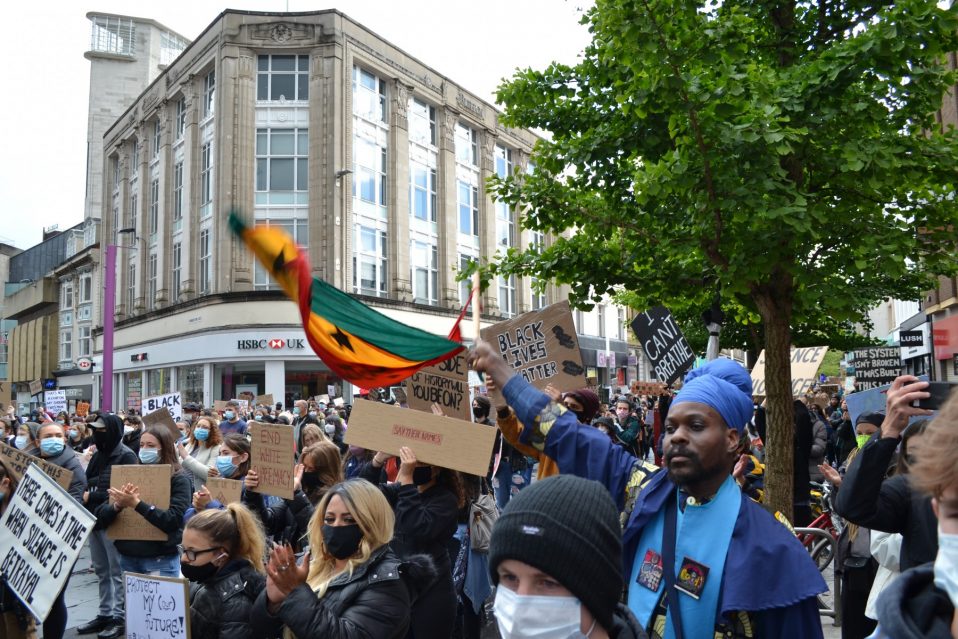 This Zoom webinar features work shared by poets from a diverse range of backgrounds, who have all recently been featured in the anthology Black Lives Matter: Poems for a New World which was published by CivicLeicester in November 2020.

Keynote speaker Dr Edson Burton, poet, writer and historian, will be joined by two hosts  – anthology editor Ambrose Musiyiwa and Rev Dr Catherine Okoronkwo, a vicar in Swindon who is also the Bishop of Bristol’s Advisor on Racial Justice.

The evening will include poetry from Dr Edson Burton, Ambrose Musiyiwa, Catherine Okoronkwo, Rosalie Alston, Tanisha Barrett, Richard Byrt and Barbara Saunders. There will also be a Q&A session exploring themes raised by the poets.

Dr Edson Burton is a writer, poet, historian, and programmer working across Bristol’s voluntary, educational and arts sectors. His academic specialisms include: Bristol and the Transatlantic Slave Trade, cultural continuities between Africa and the New World, and Afrofuturism. He has been lead researcher, consultant and coordinator of various heritage events and film programmes. Edson is regularly called upon by local and national media to comment on race and diversity.

A longstanding associate of Bristol’s Watershed Cinema, Edson curated the highly regarded Afrofuturist season (2014) which formed part of the BFI’S Fear and Wonder sci-fi season. This experience inspired his most recent project The Last Blues Song of a Lost Afronaut, which he has developed through a recent residency at the Watershed Media Centre.

Edson is a Fellow of the George Bell Institute, a board member of public arts producer Situations UK and Afrikaeye. He is also a programmer with Bristol Collective Come the Revolution. Edson has recently become artist in residence at the Pervasive Media Studio Bristol.

Ambrose Musiyiwa coordinates Journeys in Translation, an international, volunteer-driven project that is translating poems from Over Land, Over Sea: Poems for those seeking refuge (Five Leaves Publications, 2015) into other languages. He edited books that include Black Lives Matter: Poems for a New World (CivicLeicester, 2020) and Leicester 2084 AD: New Poems about The City (CivicLeicester, 2018). Currently, he is editing Poetry and Settled Status for All, an anthology that will feature poems and short prose from around the world responding to the theme, “Settled Status or Indefinite Leave to Remain for All“.

Revd Dr Catherine Okoronkwo is an Anglican priest and serves as a Vicar in Swindon. Her debut collection of poetry, Blood and Water / ọbara na mmiri, is published by Waterloo Press.
Catherine  is the Bishop’s Advisor on Racial Justice for the Diocese of Bristol, committed to supporting racial justice for the city, challenging racism in the Church and supporting and developing Black and minority ethnic clergy.

Rosalie Alston wanted to go on the Black Lives Matter march in Bristol on June 7th 2020 but was held back by being over sixty during Coronavirus Lockdown. She witnessed the statue of slave-trader Colston eerily hanging upside-down outside a museum, after retrieval from Bristol Harbour, where protesters had dumped it.

Tanisha Barrett is a mental health nurse, delivering therapy and also teaching about diversity and difference. She is a proud, black queer woman who is very passionate about dismantling systemic inequalities. In her spare time, she writes poems about mental health, race, sexuality and body image.

Some of Richard Byrt’s work, as a published poet, and for two LGBT+ history projects, explores reasons, individually and in society, for offensive, discriminatory beliefs and actions. Writing about these topics is not intended to cause hurt and offence (apologies if it does), but, hopefully, increases his self-reflection and understanding.

Barbara Saunders is an English teacher. A poem for refugees appears online (Exiled Ink, 2019) and in a fundraiser, Over Land, Over Sea (Five Leaves, 2016). Ekphrastik poems appear in Mischief and Magic (Ben Uri Art Gallery, 2018) and Writing on Glass (HLF Sutton Archives, 2018). Her grandparents were Russian Jews.

Your ticket for: Black Lives Matter: Readings and Conversation