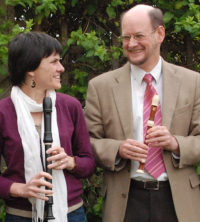 The Biber Recorder Duo are a Bristol based duo playing virtuosic repertoire for one and two recorders who take their name from the Bohemian-Austrian composer and violinist Heinrich Ignaz Franz von Biber.  Jen Mackerras and Tim Lanfear will be returning to the New Room for another lunchtime recital.

Lunchtime recitals are free, with a retiring collection. 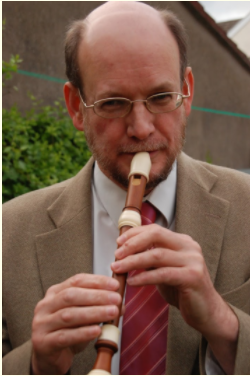 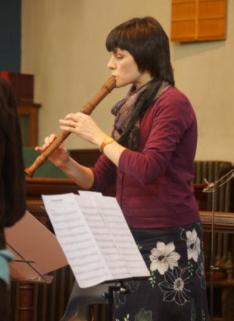 Jen first picked up a recorder when she was six. What started off as a great way to avoid having to sit in class for the last lesson of the afternoon turned into a lifelong passion for the instrument and its music, especially the modern repertoire. She studied with Miggs Coggan, composer Mike Irik and composer/player Zana Clarke (of early music group Cantigas and head of Australian publishers Orpheus Music), and attained her Associate Diploma in 1990.

Tim started playing the recorder as a child when he was given a recorder and tutor to keep him occupied for an afternoon. He was taught by Malcolm Davies. He also has served as chair of the Bristol Branch of the Society of Recorder players.

Jen and Tim met as founder members of the Pink Noise Recorder Quintet. After playing together for a number of years, they decided to explore the wealth of repertoire for two recorders, and to enjoy the discipline and depth of communication the duet music requires. They love playing together, and can’t wait to bring audiences into the sound world and dialogue of recorder duet music.

Your ticket for: The Biber Recorder Duo – Lunchtime Recital