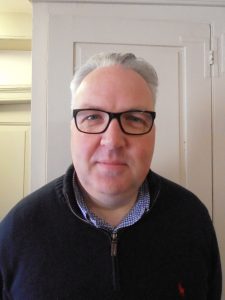 “I was appointed manager of the New Room in November 2006 with two particular briefs. One was to oversee the programme of events that the trustees had created to mark the 300th anniversary of the birth of Charles Wesley in 2007 and the 200th anniversary of the 1807 Slave Trade Act (I quickly learnt that Methodists love an anniversary!) The other was to establish what developments might be possible to secure the long-term future of the site through additional income streams from both the Broadmead and Horsefair courtyards respectively. Prior to my appointment, there had been some ideas explored with the New Room’s appointed architect, but they were still, at that time, no more than drawings.

At the time of my appointment, I was the sole employee at the New Room. The Methodist Heritage Committee (which we so value today) wasn’t established until 2009 and so it was quite an isolated role, but I was well supported by the trustees and volunteers, and we began making progress. The volunteers (or stewards as they used to be known) moved from the Common Room of the museum into the chapel itself so that a welcome could be provided from the time that visitors arrived in the building. We also moved the shop from the museum upstairs to what is, today, the chapel meeting room. These changes were but the start of what the New Room has witnessed over the past 15 years. The Broadmead Courtyard garden was opened in 2011 and the Horsefair Courtyard has been transformed since the opening of the visitor centre in 2017. Our profile has increased considerably over the last few years and we now welcome more than three times the number of visitors that we did in 2006.

On a personal note, I was brought up in a church attending family in Horsham, Sussex and was actively involved in the local Crusader group. I committed my life to Christ in my teenage years and led various Christian Union groups at both school and university. After graduating, I took up a role in the insurance sector and it was this work that brought me to Bristol in 1989. Liz, my then girlfriend, followed later in the year after her graduation. We got married in 1990 and set up home in Clifton where we became actively involved in life at Christ Church Clifton (yes, I’m an Anglican and a member of the denomination that the Wesley brothers never left!) and remained there following our move to Long Ashton in 1994. Upon the arrival of our two children in the late 1990s, we moved to Hebron Church in the village. After leaving the insurance sector in 2003, I took up a role with a national employment charity until I my appointment at the New Room in 2006. In 2017, I was given the title of director to reflect the additional responsibilities that I’ve taken on since the completion of the visitor centre build in the Horsefair Courtyard with our increased range of events and activities, both on site and now online, and an expanded staff team to manage.

What has always inspired me in my role is the dedication to service shown by John and Charles Wesley and the early Methodists. Their focus on seeking to offer a ‘social gospel’ shows both a theological understanding of the Bible but also a very practical delivery of that message to those most in need. It is the universality of this message which I believe explains why the Methodist Church has been such a force for good in the world over the last three centuries. I view the New Room as a place of pilgrimage that continues to inspire those who visit but also a place of commission where visitors can be refreshed and renewed on their spiritual journey, in much the same way that John Wesley himself did in the 18th century.

I feel very privileged to be entrusted with the responsibility of the stewardship of the New Room; a line of continuity that dates back to 1739. That ethos of using our heritage for evangelistic purposes is beautifully illustrated in this quote from the American abolitionist, Wendell Phillips (1811-1884) who wrote, ‘The heritage of the past is the seed that brings forth the harvest of the future’.

Thank you for financially supporting our work through your membership of the Friends as the New Room continues its ministry of being a lantern in the city of Bristol. Long may it shine as the oldest Methodist building in the world!”

David Worthington – Director of the New Room, May 2021

Your ticket for: David Worthington