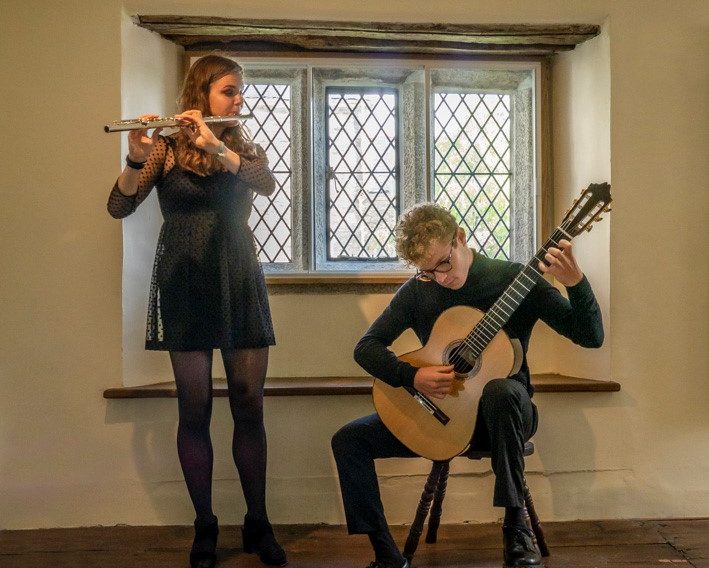 Flautist Emilia Parr and classical guitarist Ross Morris will present a programme of works for flute and guitar on Friday 13th December.

Emilia Parr is a flautist from Bristol and Ross Morris is a classical guitarist from Cornwall.  Since starting playing together in 2017, the duo has performed recitals in Manchester, Glasgow and London, and was awarded third prize at the North International Music Competition.  As a duo, they study with Matthew McAllister and Sasha Savaloni at the Royal Conservatoire of Scotland.

Emilia studied at the Guildhall School of Music Junior Department, then went on to study for two years at Chetham’s School of Music in Manchester.  Currently, she is studying at the Royal Conservatoire of Scotland under Katherine Bryan and Helen Brew, where she performs as a soloist, in orchestras and in Orbis Duo.

Ross Morris studied at the Royal Welsh College of Music Junior Department before also moving to Chetham’s School of Music.  He is now also studying at the Royal Conservatoire of Scotland under Professor Allan Neave where he has played in masterclasses with top guitarists such as David Russell and Pavel Steidl among others.

Join us for this free recital at 1.30pm on Friday 13th December in the beautiful acoustics of 18th Century chapel.  The concert will be preceded by Holy Communion from 1pm-1.25pm.  All are welcome.

Your ticket for the: Lunchtime Recital – Orbis Duo, flute & guitar