As part of the "Walking with Micah" project Methodist Heritage invited John Wesley's New Room to share objects from the collection connected by the theme of justice. We have selected "An Account of a Trial held in Gloucester in 1743" from our library and John Wesley’s Shoe Buckles from our museum collection to highlight Methodist stories of overcoming injustice and empathising with those, who experience injustice.

An Account of a Trial held in Gloucester in 1743 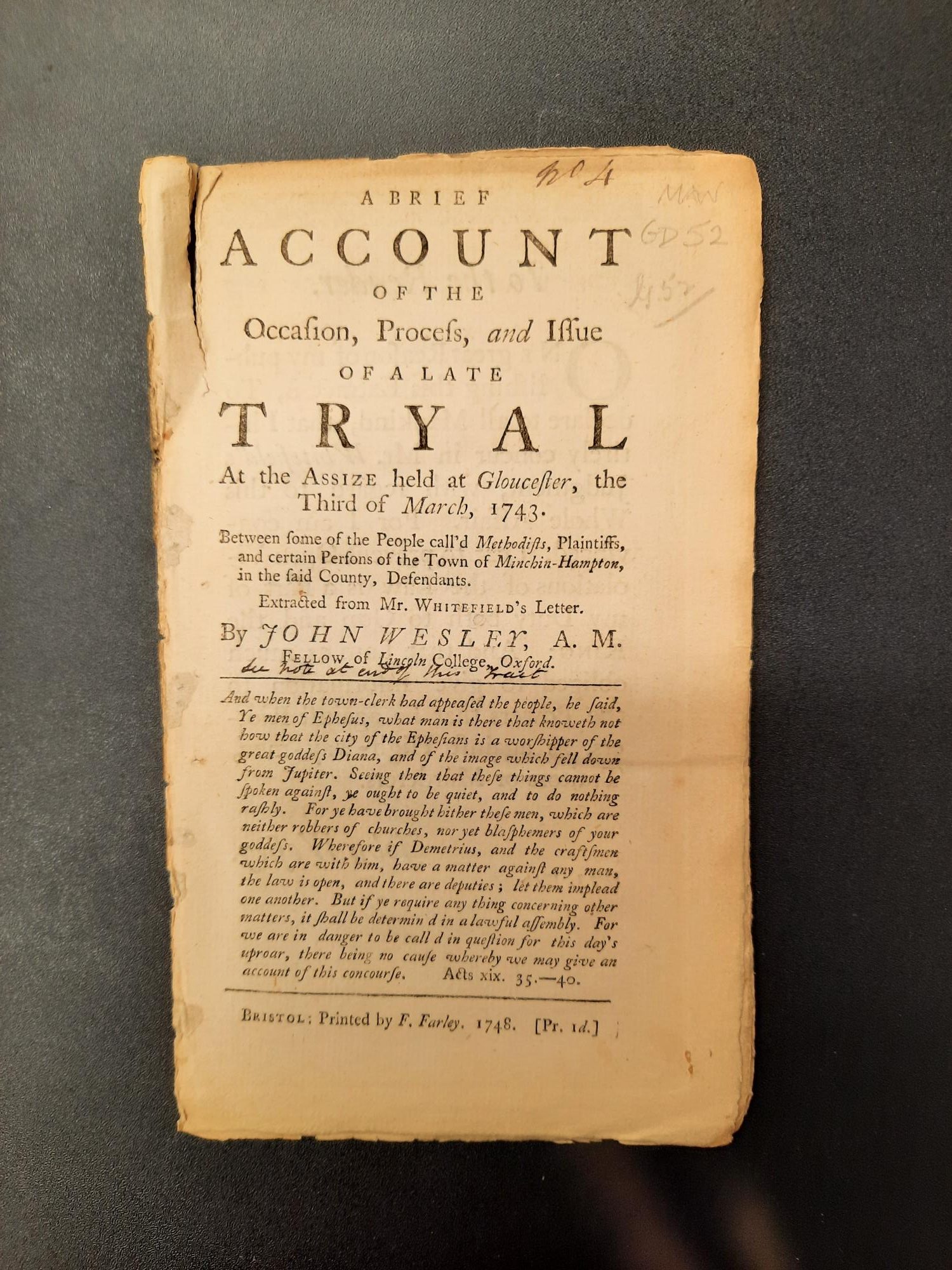 This pamphlet speaks of remarkable human courage, conviction, and self-control amidst a world of violent persecution. It gives an account of a trial held at the Gloucester assizes on 3rd March 1743. It details the abuse suffered by Methodists from the mob who came in great numbers to inflict terror and violence upon them.

Mr Adams had a dwelling house in Hampton, Gloucestershire and was blessed with many people in his congregation. Mobs came in great numbers with low bell and horn to beat and abuse the people. They expected to be murdered, they hid in holes and corners. The mob pulled women down the stairs by their hair. Men were thrown into the sink-pit, and feared being drowned.

“We knew we wanted to exercise no revenge among the rioters, and yet we thought it wrong that the gospel should be stopped by such persons, when the Government under which we lived countenanced no such thing; and also, that it was absurd to thank God for wholesome laws; if they were not to be made use of.”

There was a day of fasting and prayer through all the societies in England and Wales. Methodists were accused of ‘infecting and hurting the people,’ and people cried for them to be ‘stopped for the good of the country.’ They accused the Methodists of starting the riot, but the mob were found guilty based on the wealth of evidence and eyewitness reports.

The account finishes with a prayer for His Majesty King George. It is another nod to Methodists publicly affirming the authority of the crown when rioters accuse Methodists of inciting rebellion. The prayer begins, “Sovereign of all whole Will ordains The Powers on Earth that be; by whom our rightful Monarch reigns, subject to none but Thee:”

Why have we chosen this artefact?

“This account shows me that Methodists in the 18th century didn’t just sit back and take persecution when there was a peaceful means of defence at their disposal. That even though they felt blessed to suffer for Christ’s name, they also knew that God was a God of justice.”

“I love that this story brings to light ordinary people, with homes, families, occupations, and faith. It speaks of remarkable human courage and conviction.”

“It’s wonderful that publications such as this one helped defend their cause, the pen is truly mightier than the sword! 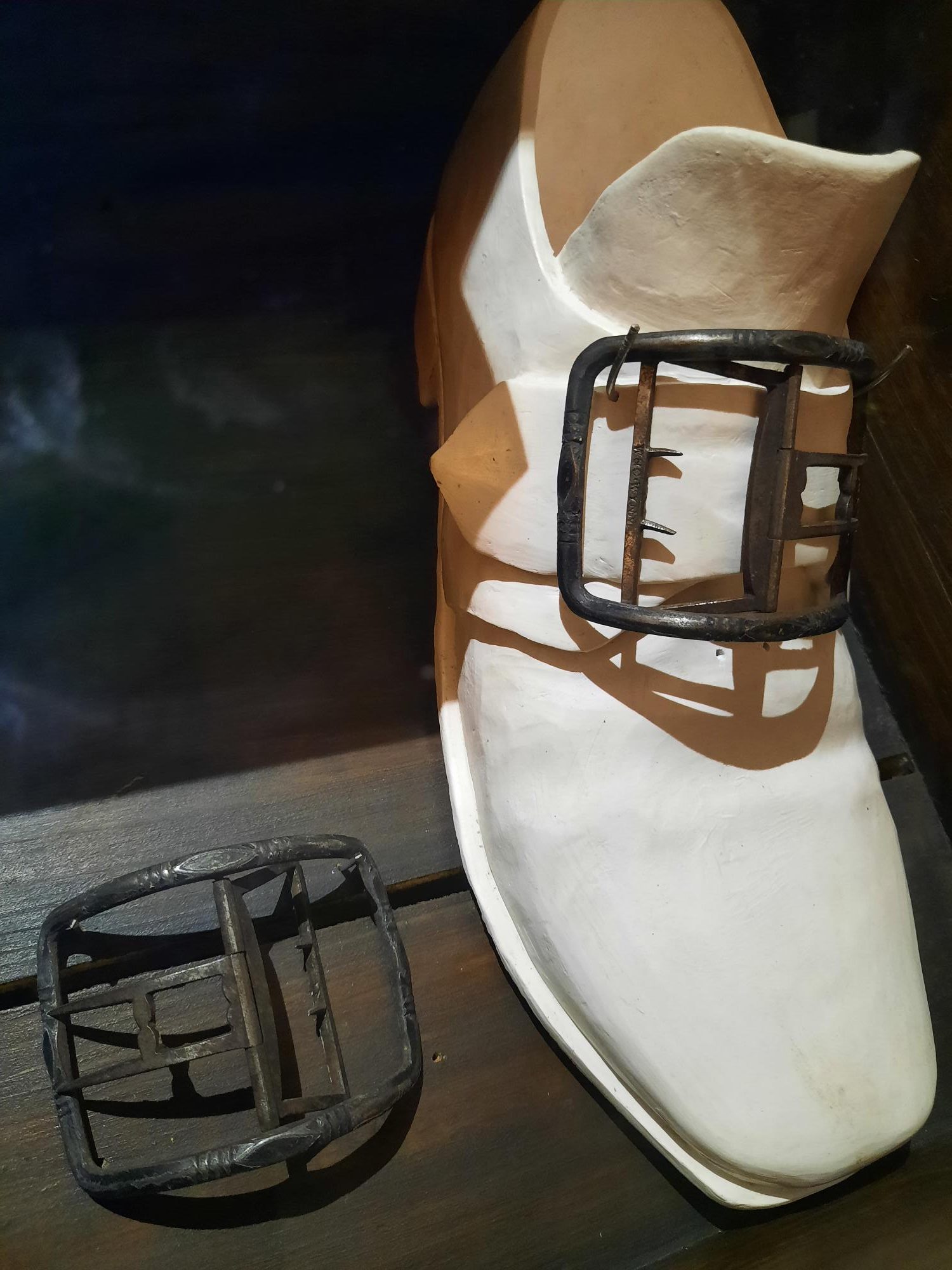 These shoe buckles remind us of how much John Wesley despised injustice and of how much he valued education.

As a young man teaching in America John Wesley was shocked to see the pupils from richer families mocking those classmates who could not afford shoes. His response was to turn up at school himself wearing no shoes. These shoe buckles belonged to John Wesley and this story is a perfect reminder of Wesley’s intention in helping bring families out of poverty through education.

The divide between rich and poor was stark in the 18th century, the injustice of this stirred the heart of John Wesley who as a gifted teacher set about providing education for people, not only in the classroom, but through his many publications. His writings were so extensive that Bristol became the largest printing centre outside of London.

Following his time teaching in America, John Wesley went on to establish his own school in Kingswood, Bristol which later moved out to Bath in 1852. His legacy is astounding, there are now hundreds of Methodist schools worldwide.

Why have we chosen this artefact?

“I love how such a personal item reflects such a powerful story.”

“These buckles, however ordinary looking carry with them a story that sadly still speaks to us today.”

“Imagine how many people are part of this legacy- every pupil from every Methodist school, worldwide!”

We believe that it is important to discuss the issues behind these objects because injustice is still something we live with today. There is something in the human condition that wants to fight for justice, and that spans across time and place. Stories of people connect us, and artefacts bring a concrete item to contextualise - a unique way of exploring the past.

Your ticket for: Sharing our Justice Journey