The New Room is sharing a Friday reflection each week. We hope that these short reflections will act as a point of spiritual focus, enabling a moment of quiet thought and prayer. 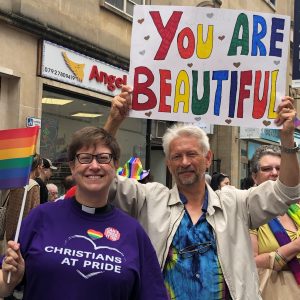 “I would like to tell you about two days that I will never forget.

In 2018 the New Room team was approached by a small group called Christians at Bristol Pride. They asked if they could hold a service in the chapel on the day of the city’s annual Pride march in July.

CABP consists of LGBT+ and straight Christians who arrange to join together in worship and prayer before taking part in the march itself and providing an inclusive and affirming Christian presence.

The trustees said yes, preparations were made and everything was ready.

On the day before the service, we found out that a group which actively campaigns against the acceptance and inclusion of LGBT+ people in the Church had issued a press release urging its supporters to picket the service.

On the day, 80 affirming people gathered to take part in the service, but several protesters also ‘gatecrashed’ the event. One of them hid upstairs in the chapel gallery and then made his way to the pulpit to proclaim his opposition.

He had his say and then left – and the service continued without further disruption.

In 2019, we held another Christians at Bristol Pride service. More than 100 people gathered once again to worship and pray. We heard stories from LGBT+ people about their personal experiences, good and bad. It was an uplifting experience – with no gatecrashers!

This time, after the service, two things happened. One group went off to join the march. Another smaller group of people, including me, stood on the pavement outside the New Room as the Pride march went past. We held up affirming posters – ‘you are beautiful’ – ‘we are your friends’ – and the response was beautiful too. We received smiles, waves, stickers and some very emotional thank yous and hugs.

Further down the street, another group of Christians were again staging a protest against Pride. They stood haranguing the march against a backdrop of big wooden crosses and black banners. I am so glad that everyone on the march was able to see signs telling them they were loved before they saw the negative and judgemental images.

In Pride Month, as an ally, I give thanks for my  LGBT+ friends who are precious in the eyes of God.”