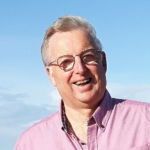 Today’s reflection is from Andrew Sails who is a Supernumerary Minister. He currently lives in Exeter, where he was minister at the Mint Methodist Church from 2002 to 2013.

When the US President comes to town, he rides in a bullet proof and gas proof limousine called the Beast. The SUVs in his motorcade are allegedly filled with secret service personnel armed with guns able to fire at the rate of over 4000 rounds per minute.

Times and technology change, but some things stay the same. Ancient Roman Emperors didn’t have bullet proof limos, but they did have war horses. They were not surrounded by Secret Service men but by armed soldiers.

The trappings of raw power, so often abused throughout history: Caesar entering Rome on his war horse; Hitler entering Vienna in open topped staff car: tanks rolling into Tiananmen Square or on the streets of Myanmar.

On Palm Sunday Jesus’ triumphal entry into Jerusalem was on a donkey. No War Horse or Staff Car, no legions of angels nor tanks nor machine guns – Just a man on a donkey. Like a King driving down Whitehall in a clapped-out Ford Fiesta with 150,000 miles on the clock – a humble but practical means of getting from A to B, of doing the donkey work.

And here is a question -When faced with hatred and violence – which are the stronger weapons – the tank and the gun or love and forgiveness?

So often, from Constantine onwards, the Church has been tempted to abandon the donkey of peace, and settle for sprinkling holy water over the warhorses of Caesar.

Remember the words of Mahatma Gandhi, who based his methods passive non-resistance on the person and activities of Jesus: “First they laugh at you, then they fight you, then you win.”

Lord, help us to face the powers that be with courage and faith in you.
Help us renounce the ways of evil and violence, and take up the weapons of sacrificial love.
Help us spread the light of peace and justice in our dark world.
And so, as we approach Holy Week, give us strength to take up our cross and follow you.
Amen.