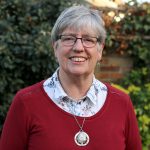 Alison Judd is a local preacher in the Southampton Circuit. Involved in Methodist Women in Britain from its inception in 2011, she served initially as Britain and Ireland Area President of the World Federation of Methodist and Uniting Church Women. She was appointed as World President in 2016, at the World Assembly in Houston Texas.

Isaiah 40: 30-31 ‘Even youths will faint and be weary, and the young will fall exhausted; but those who wait for the Lord shall renew their strength, they shall mount up with wings like eagles, they shall run and not be weary, they shall walk and not faint.’

While enduring the travel restrictions and various levels of lockdown over recent months, I found it both exciting and tantalising to read about the exploits of the four White-tailed Eagles that were introduced onto the Isle of Wight in August 2019. Two of them even travelled to Scotland for two months in the summer, before returning to the Isle of Wight. Two others spent time in Yorkshire, Lincolnshire and Norfolk. What stupendous views they would have enjoyed! What freedom to soar, and dive and fish in the coastal waters and rivers. What delight they must have experienced in flying alone or together in perfect freedom, sustained by the air currents and gliding with effortless ease.

The verses from Isaiah 40 could describe the experience of many people today, struggling with stressful responsibilities in hospitals, schools, churches and homes. Many, regardless of age, are feeling exhausted. And yet, we hear testimonies of those who find additional energy and purpose through their faith in God and concern for others. Some are able to bear witness to the sustaining power of encouragement and prayer support. I know that when I become overwhelmed by my own immediate daily needs, or so anxious about the future that I become transfixed by doubt and fear, I do well to look up and remember that ‘those who wait for the Lord shall renew their strength.’

I love the fable of the eagle chick that, having fallen from the nest, was placed by a well-meaning farmer in a chicken coop. Over time, it behaved as though it was a chicken. It believed it was a chicken. It spent its days pecking around in the dust in search of grain, until one day a stranger came by and, recognising its true identity as an eagle, urged it to look up into the sky.  There in the far distance, the young bird spotted an adult eagle, soaring and swooping on the thermal currents high above. Something stirred in the eagle chick and it spread its huge wings and launched itself into the air. Leaving behind the confines of the chicken coop, it realised its true potential.

Remind me today that I am your child,

with the potential to serve others in the strength you supply.

Help me to overcome all restrictions

of fear and frailty,

so that I can be truly as you intended me to be.

For your kingdom’s sake,