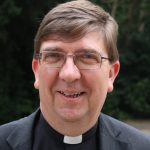 Revd Dr Jonathan Hustler is the Secretary of the Methodist Conference and a trustee of The New Room. He has served in Circuit ministry in Buckinghamshire, Yorkshire, and Lincolnshire. He became Ministerial Co-ordinator for the Oversight of Ordained Ministries and Assistant Secretary of the Conference before his appointment to his current role in 2019.

‘Nation will not lift sword against nation, nor ever again be trained for war.’ (Isaiah 2 v4)

Amongst the many carols I shall miss singing in church this Christmas is Edmund Hamilton Sears’ hymn, ‘It came upon the midnight clear’, a reflection on the angels appearing to the shepherds and proclaiming ‘Peace on earth, goodwill to all people.’ However, in a powerful and haunting line, Sears notes, ‘Beneath the angel strain have rolled two thousand years of wrong.’ I remember singing it as a child and calculating that there had not (then), quite been 2000 years and that when Sears wrote it the time had been even less. Eighteen hundred and fifty years of wrong did not scan. My hope that humankind would not manage the full two thousand years of wrong has not been realised. Since my childhood, the conflicts in so many places have drowned out the angel song.

However, should we be surprised? Centuries before the birth of Christ, the prophet Isaiah longed for a day when people would be free from war, when swords would be beaten into mattocks. God’s will is clear – people should live at peace with each other and the prophet dreamt of a time when his home city of Jerusalem would become a symbol of that peace. Somehow, then and now, warfare seems to be part of human life.

Among the many people who died this year was the journalist Robert Fisk. Fisk made his name as a war correspondent with, arguably, the best understanding of the conflicts in the Arab world of any writer in the last thirty years. He was outspoken in his opposition to armed conflict: ‘War,’ he wrote, ‘is not primarily about victory or defeat but about death and the inflicting of death. It represents a total failure of the human spirit.’ Isaiah’s words about peace are an invitation to us to consider what it means to be humankind under the reign of God; we are not the human beings God makes us to be if we are at war with each other.

We see the human being that God makes us to be in the baby of Bethlehem.  The promise of peace on earth is sung over a makeshift cradle, which houses a vulnerable human life. We need not only to hear the angels sing but to hear the baby cry, to watch the child grow up, to listen to his call to love, and to go with him in his utter fidelity to that message. As Isaiah put it, ‘Let us walk in the light of the Lord.’

Lead us from death to life,

From falsehood to truth.

Lead us from despair to hope,

From fear to trust.

Lead us from hate to love,

From war to peace.

Our world, our universe.

Friday Reflections are taking a short break over Christmas and New Year but will resume on Friday 8th January with a reflection from a previous Vice President of Conference and current Chair of Methodist Council, Jill Baker. Thank you to everyone who has contributed to our Friday Reflections in 2020. These have been an encouraging, uplifting and engaging addition to our website and we look forward to many more interesting reflections in 2021.