Just a fortnight after Greta Thunberg’s visit to Bristol a public discussion at the New Room in Bristol’s Broadmead will put the effectiveness of non-violent protest under the spotlight. 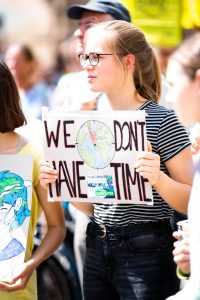 Scheduled for 6pm on 19 March the talk will give audience members the chance to hear first-hand from John Cooper, director of the Fellowship of Reconciliation (FoR) and Maggie Moss, a participant in Extinction Rebellion (XR) actions, and will be followed by a question and answer session.

Entitled ‘Sit Down Next To Me: Does non-violent protest work?’ this is the third in the new ‘Wes Talks’ series, a joint initiative run by the New Room and the Methodist Learning Network (South West) which offers an intelligent analysis of key topical issues by knowledgeable speakers.

Speaker John Cooper will enlarge on FoR’s maxim ‘non-violence in action’ with illustrations of how, since its creation at the start of First World War in 1914, FoR has worked to bring alive the promise of peace and the power of non-violence

An international movement of people who commit themselves to active non-violence as a way of life and as a means of personal, social, economic and political transformation, FoR has permanent representation at the UN.  Over the years, FoR members have been important contributors to numerous peace campaigns across the world, earning six Nobel Peace Prizes, and they continue to champion disarmament, focusing especially on nuclear weapons and armed drones.

By contrast Extinction Rebellion (XR) is the new kid on the block, having been launched in late October 2018, but the movement has already attracted the support of tens of thousands of people in dozens of countries around the globe who support its aim of using non-violent civil disobedience to try and halt mass extinction and minimise the risk of social collapse – a strategy which has already generated huge national and international publicity.

Maggie Moss will tell her story of how, as an ordinary Bristolian, she felt so strongly about environmental issues that she decided to get involved in a non-violent XR protest.

The event starts at 6pm on 19 March. Tickets cost £5 and are available to buy at the New Room, or through Eventbrite here: https://bit.ly/337V02q . Alternatively, places may be reserved in advanced by emailing info@newroombristol.org.uk with payment on the door.

The next Wes Talk will take place on 16 April when New Room and Methodist historian Gary Best will try and answer the question ‘What’s a human worth?’ with reference to John Wesley’s response to slavery.

Your ticket for: FOLLOWING IN GRETA’S FOOTSTEPS