A student whose passion for history gained her a year’s internship at the world’s oldest Methodist chapel has used her time to create an oral history exhibition composed of recollections from people who have lived, worked or worshipped at the New Room, otherwise known as John Wesley’s Chapel in Bristol’s Broadmead.

In creating the exhibition One Chapel, Many Voices – which opens on 24 May, will run throughout the summer and is free – 21-year-old Annie Sharples interviewed a large variety of contributors, collecting fascinating insights into the role of and happenings at the New Room in the mid-late 20th and early 21st centuries.

Until 2016/17 when a multi-million pound Heritage Lottery-funded visitor centre and museum was created behind and above the chapel, the upstairs rooms – originally used as accommodation by John Wesley and other visiting preachers – served as a flat for a series of resident custodians, some of whom feature in Annie’s collected oral history.

Other contributors include volunteers, staff members and trustees, as well as people who have celebrated weddings and baptisms in the chapel, been there during bomb scares and – more recently – witnessed the filming of BBC’s hit TV series Poldark.

Annie said: “The aim of the project was to recognise and document the dedication of so many people to this place of history and sanctuary. What was striking for me was the great love that people have for the New Room and the importance of the welcome and peace that it offers for all.

“My starting point for the project was a list of a dozen people supplied by the staff team, then the first interviewees suggested other possible contributors so the scope of the project grew and grew.

“I started interviewing last October and did the final one – number 25 – in February.

“I had to prepare interview questions, record our sessions, transcribe the conversations and then edit them so they were ‘exhibition-ready.’

“It’s one of the most interesting projects I’ve ever been involved with, and meeting and listening to all those lovely people was a real privilege.”

The exhibition comprises 10 illustrated panels with audio clips of people telling their stories, which visitors can access using the free audio guide provided. Transcripts of each clip are also available near each panel.

For those visitors wishing to hear more stories in full, or who would like to sit down and listen at their leisure, the audio content will be made available on the New Room’s website www.newroom.bristol.org.uk from 24 May.

The earliest stories date from the 1950s, the most recent are from the team who kept the New Room’s rich heritage and fascinating history alive throughout its 18-month redevelopment and reopening in 2017.

Some clips are moving, others humorous, such as this one from Stephen Normanton, husband of Philippa who was custodian from 1987-90:

“It was our home… I sometimes wrote college essays on John Wesley’s windowsill in his room, on his desk sometimes. We pushed the pram round the table in the common room to get Robert to sleep.”

Another clip has New Room trustee, Mike Rose, sharing this anecdote from 2017: “Towards the end (of the redevelopment project) we found out the Charles Wesley statue was coming back, and it suddenly appeared on the back of a lorry, standing vertical, and the lorry had to stop outside in the middle of the road with this magnificent statue beckoning all the traffic.

“People came from miles just to see this extraordinary big statue in the middle of the road, standing there beckoning.”

Entrance to the exhibition in the chapel is free and accessible during normal opening hours – Monday to Saturday 10.30am to 4pm all year. There are additional new audio clips in the New Room’s wheelchair-accessible museum, for which tickets cost £7 for adults, £4 for children. Family and group rates and concessions are also available.

Further information about the oral history project is available from Annie at intern@newroombristol.org.uk or call 0117 9264740. 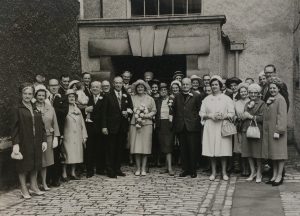 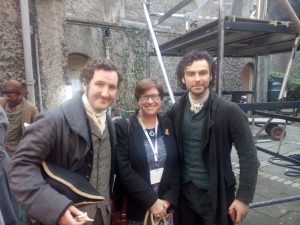 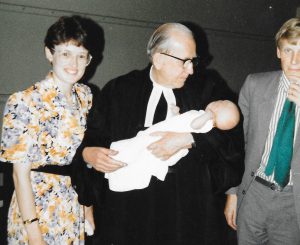 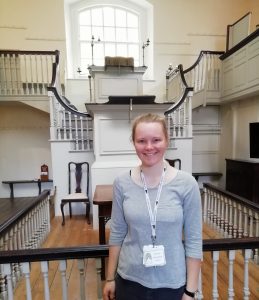 Your ticket for: ANNIE CREATES ORAL HISTORY EXHIBITION FOR THE NEW ROOM