Hot on the heels of International Women’s Day (8 March) the New Room in Bristol’s Broadmead is holding a celebration of the 350th anniversary of the birth of Susanna Wesley, a remarkable woman who is recognised as the ‘Mother of Methodism’ even though she never preached a sermon, published a book or founded a church.

Between 10am and 4pm on Saturday 9 March the New Room will host dramatic readings and talks in recognition of Susanna’s life and ministry, with a workshop at the end of the day and time for prayer and reflection throughout. 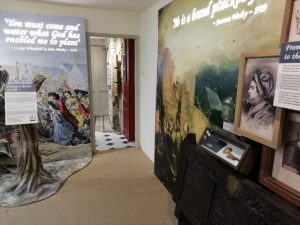 Due to the culture of her day, Susanna’s achievements have been more widely acknowledged since her death than they were in her lifetime, with many modern Methodists readily recognising the significance of her intellectual and spiritual contributions.

Kate Rogers, community engagement officer at the New Room, said: “Susanna modelled a life of humility and cheerfulness despite immense trial and disappointment.

“Our day of celebration will allow people to learn more about how Susanna’s story can challenge and inspire us to trust in God’s faithfulness today.”

Journaling was always very important to Susanna, being one of the few means of expression for women in the eighteenth century. She noted in a margin – possibly for her eyes only – women could ‘think much and speak little.’

Her self-discipline and spirituality had a significant impact on the lives of her children, and there is plenty of evidence that Susanna’s parenting launched her sons John and Charles on the pioneering routes they followed as adults, as founders of the Methodist movement which now has 75 million members across the globe.

Mother of a large family, Susanna was a constant tower of strength for her husband Samuel and provided a stable home and a good education for their children, all of whom – including daughters – learnt Latin, Greek and classical studies.

She also led groups of local people in instruction when Samuel was away, and still found the time to read widely and to write.

Clare Heath-Whyte said: “In many ways Susanna Wesley is an inspiration. Her priority was always to bring glory to God in whatever circumstances she found herself.
“We would never have heard of her if she had not been the mother of famous sons, and she is a wonderful example.”

Tickets for the day are £12 – which includes entry into the state-of-the-art museum at the New Room and refreshments – and are available in the New Room shop or via Eventbrite. The New Room, also known as John Wesley’s Chapel, is at 36 The Horsefair, Broadmead, Bristol BS1 3JE, telephone 0117 9264740.  For further details see www.newroombristol.org.uk

Your ticket for: DAY OF CELEBRATION FOR 18TH CENTURY HEROINE