Young fans of the nation’s favourite storyteller, Sir Michael Morpurgo, were thrilled to meet and talk with the author when he popped into the New Room in Bristol this week.

The bestselling writer was visiting the oldest Methodist building in the world to view a collection of life-sized flamingo collages decorated by local youngsters.

The flamingos are part of Bristol’s annual Easter Trail organised by the New Room and the Ark Bus Project, and displayed in over 50 shops around the city centre. 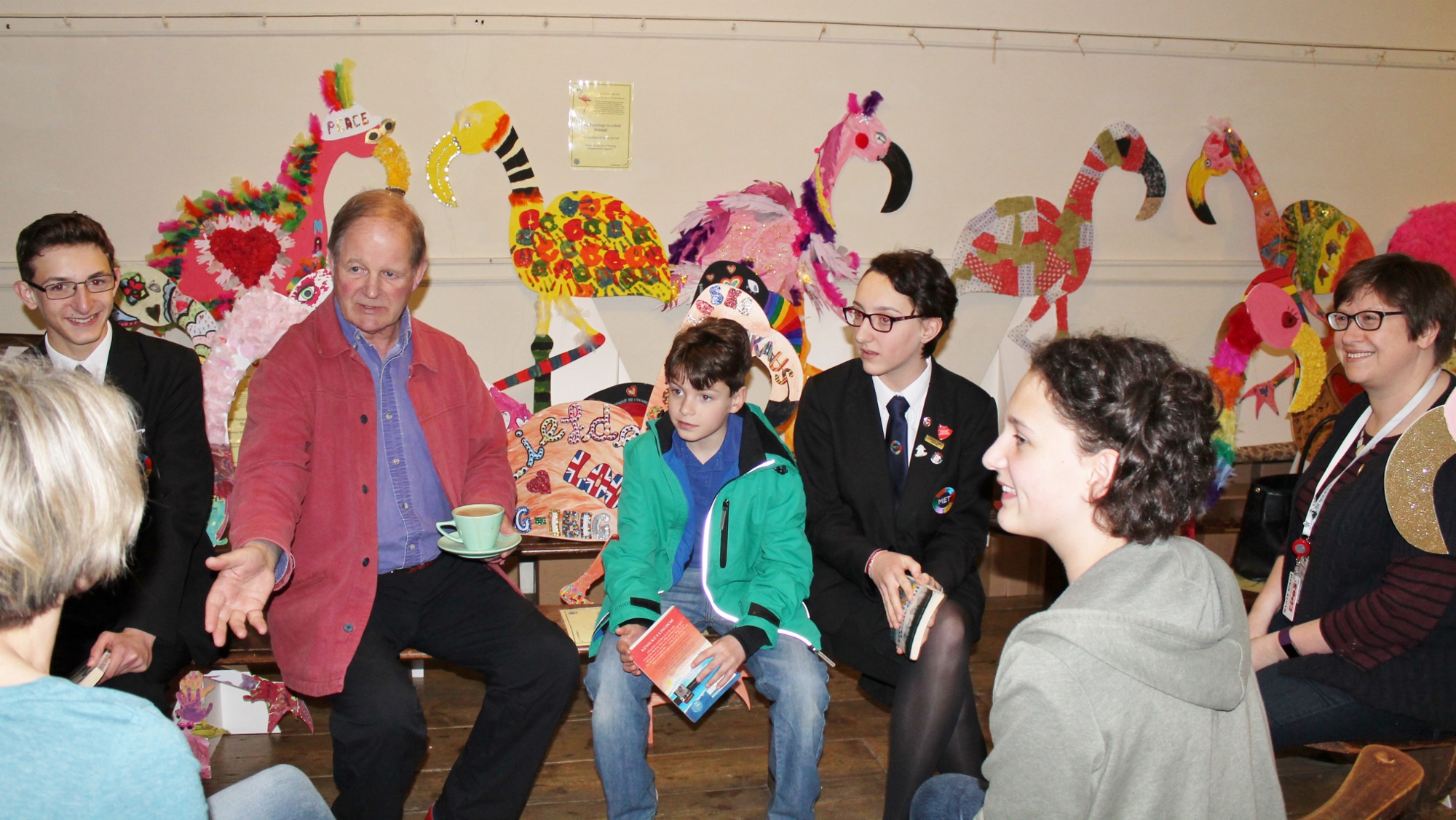 Sir Michael’s visit to the New Room – also known as John Wesley’s Chapel – ties in with the launch of his latest novel Flamingo Boy.

Mandy Briggs, education officer at the New Room said: “We invited Sir Michael to visit because of the coincidence over the flamingos.

“It was a pleasure to hear him talk about the history behind his new novel, set in a period when anyone who was perceived to be different was under threat.

“It really makes you think about the importance of tolerance, which was the theme behind our own flamingo project.”

Mandy says she also discovered other parallels between the museum and the celebrated War Horse author.

“It turns out that Charles Wesley – brother of John Wesley, who founded the New Room – was a distant relative.

“What’s more Sir Michael is not only the nation’s favourite story-teller, he’s also an accomplished folk-singer. Maybe he inherited his love of music from Charles who was a famously prolific hymn-writer.”

During his visit Sir Michael admired the flamingo exhibition and the historic chapel, then shared with fans the story that inspired Flamingo Boy.

Morpurgo super-fans Freya, Alexander and Alice Bourne and their cousin Oliver Davis, listened spellbound as Sir Michael shared the history behind the novel.

Sir Michael told how a visit to the Camargue: “…a wild and wonderful national park where pink flamingos fly,” gave him the story of an autistic boy growing up among them during the Second World War in the occupied South of France.

“On a visit to a school once I was called Mr Flamingo! Having spent a year writing my book, and living with flamingos in my mind’s eye, I think I prefer Mr Flamingo to Mr Morpurgo. Beautiful, beautiful birds.

“Novels can help you learn to understand about other people, people of different colour, of different religion, of a different age, and I love to unearth interesting tales that can be adapted and developed to stir the imagination of a young audience.”

As part of his visit Sir Michael was also given a lightning tour of the chapel’s new Heritage Lottery-funded museum.

Sir Michael, who was awarded a knighthood for his services to literature and charity in this year’s New Year Honours list, said: “We all reinvent traditional works. Charles pinched folk tunes for his hymns, and I pinch historical tales for my novels. 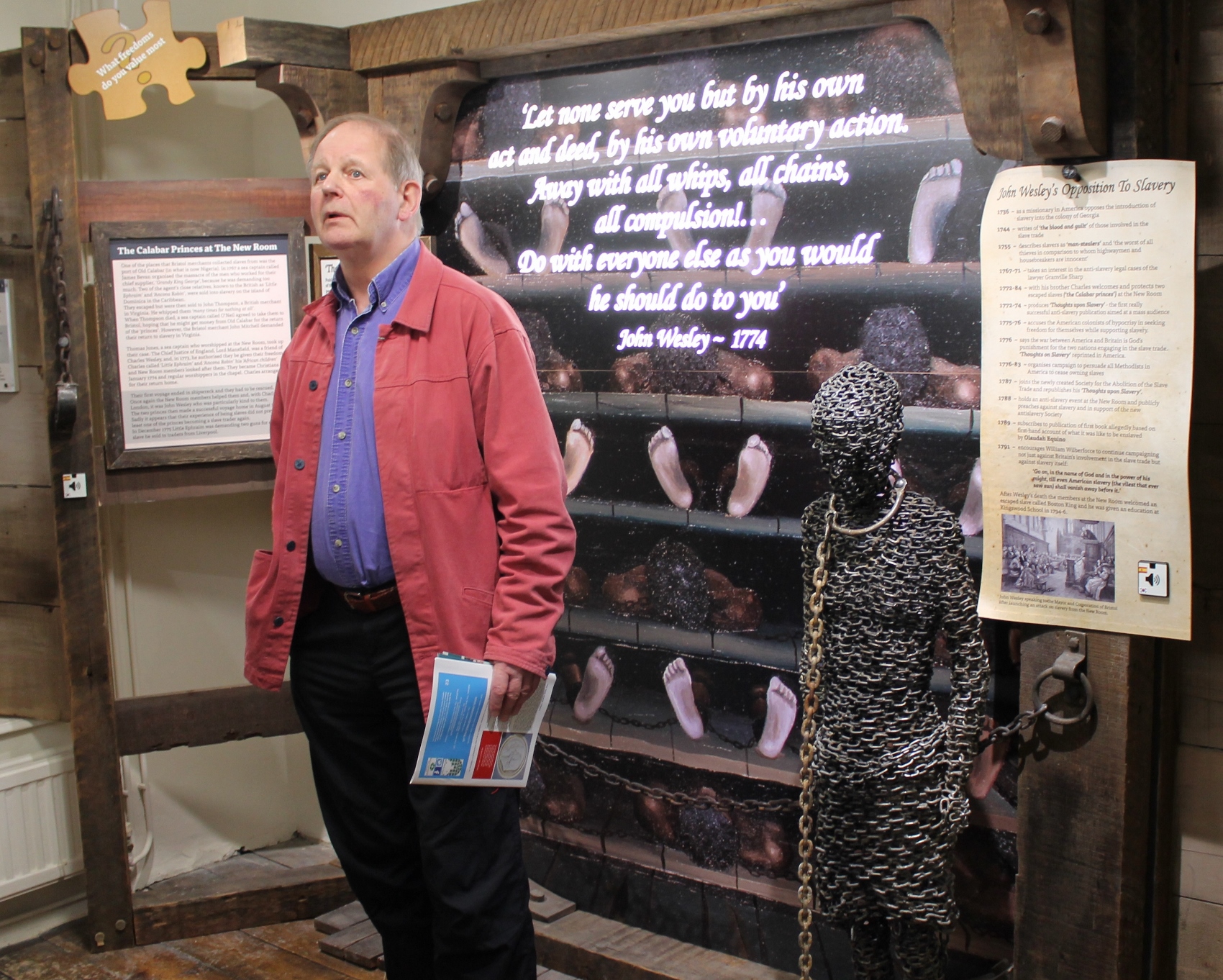 “I am very proud of this family connection, and definitely want to come back to the New Room with my wife Clare and have a really good look around the new museum.

“It’s full of things with absolutely fascinating stories behind them, so you never know what new inspiration might be waiting there.”

The author was particularly interested in the exhibits telling the story of the Wesleys’ campaign to abolish slavery, a crusade which was ahead of its time in the mid-eighteenth century and inflamed a violent response from local merchants.

The New Room and visitor centre are open from Monday to Saturday 10.30am to 4pm all year. Entrance to the chapel is free, and visitors can enjoy a Fairtrade coffee and home-baked cake or light lunch at the award-winning café.

Admission to the Wesley museum is £3 for children and £6 for adults, with family tickets at £9 for one adult plus children, or £14 for two adults plus children. School groups and workshops cost £4 per pupil. Other concessions and group rates are available, for details see www.newroombristol.org.uk

Flamingo Boy by Michael Morpurgo, published by Harper Collins, is available from all good bookshops in hardback, as well as in e-book and audiobook formats.

Your ticket for: NATION’S FAVOURITE STORYTELLER VISITS THE NEW ROOM