CHAIR THAT PLAYED ROLE IN SLAVE FREEDOM BACK ON DISPLAY

A magnificent chair, made from the roots of a single oak tree for a man who played a significant role in the ending of slavery, is back on permanent display in Bristol.

Adam Clarke’s large black chair dates from 1820 and was presented to the Methodist theologian by admirers of the scholar, who produced one of the most influential commentaries on the bible.

He was an early opponent of slavery and campaigned in Bristol for its abolition in writings made while using the chair.

In one passage he said:  “Let the oppressed go free – How can any nation pretend to fast or worship God at all, or dare to profess that they believe in the existence of such a Being, while they carry on the slave trade, and traffic in the souls, blood, and bodies, of men! O ye most flagitious of knaves, and worst of hypocrites, cast off at once the mask of religion; and deepen not your endless perdition by professing the faith of our Lord Jesus Christ, while ye continue in this traffic!”

The chair is now taking pride of place in a newly opened museum at the New Room in Broadmead after being restored.

Methodist historian Gary M Best said: “Adam Clarke was an Irishman with quite a fiery character and arrived in Bristol as a young man in his early 20s to study at Kingswood School. John Wesley had invited him but the headmaster was not expecting him and wouldn’t give him a proper room as his wife thought he was carrying some strange illness from Ireland. Clarke describes how the wife was like ‘a Bengal tiger’ and covered him with a foul-smelling ointment.

“His unhappiness at the way the school was run led to Wesley dismissing the headmaster. Clarke went on to become one of the big leaders of Methodism and, like Wesley, he was a fierce opponent of slavery, which made them very unpopular with the Bristol Merchants at the time.”

The magnificent chair was given to Clarke as a gift by those who admired his work interpreting the Bible and making the Methodist movement a separate church. But he was not so flattering in his description of his own time at the New Room, where he lived while running the Bristol circuit.

He said: “The noxious breath of so many hundreds of people who assembled there throughout the week made the place extremely unhealthy. The plan of building the lodging rooms over the chapel…was greatly prejudicial to the health of the preachers and their families.”

The chair was made from the roots of a tree in his garden and is one of the treasured exhibits at the museum, which is housed in a series of 12 rooms which were created in 1748 to house Wesley and early preachers and ministers, such as Adam Clarke.

Visitors can see John Wesley’s bedroom and the main living room of the preachers and interactive displays show what life was like in Bristol in those days when the slave trade of local merchants was challenged and ultimately defeated by campaigners such as Clarke.

The adjoining chapel, which is the cradle of Methodism, is free to enter and a recently opened café provides refreshments. The museum costs £3 for children and £6 for adults, with family tickets at £9 for one adult plus children, or £14 for two adults plus children. Other concessions and group rates are available, for details see www.newroombristol.org.uk . 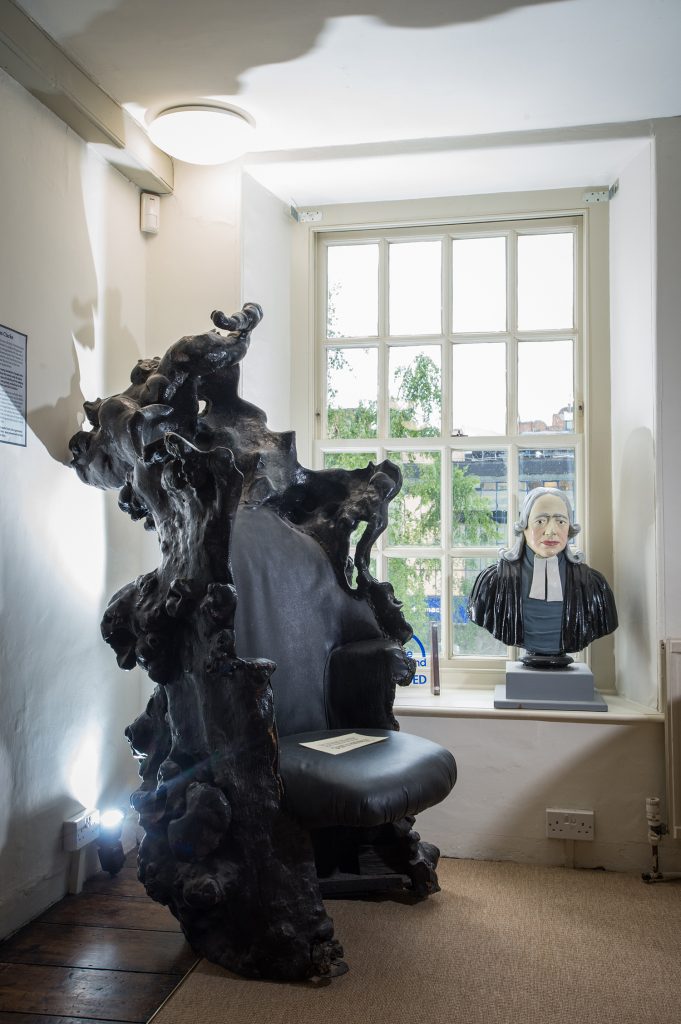 Your ticket for: CHAIR THAT PLAYED ROLE IN SLAVE FREEDOM BACK ON DISPLAY

CHAIR THAT PLAYED ROLE IN SLAVE FREEDOM BACK ON DISPLAY