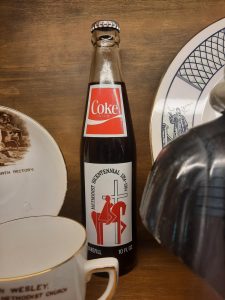 This Coke bottle marks the Bicentennial of the birth of American Methodism (1784-1984). It was the winter of 1784 when 60 preachers arrived at the Lovely Lane Meeting House in Baltimore, Maryland. Francis Asbury and Thomas Coke led this historic conference which saw the formation of the Methodist Episcopal Church. Asbury records in his journal, “We were in great haste, and did much business in a little time.” It was here that American Methodists affirmed their independence.

The Coca-Cola Company have a long history of producing anniversary labels. But did you know that the founder of the Coca-Cola company was a Methodist? American business tycoon and philanthropist, Asa Candler of Carroll County, Georgia attended Atlanta First United Methodist Church with his family. In 1888 he purchased the Coca-Cola recipe for just over $200 from chemist John Stith and in 1892 he founded the Coca-Cola Company. Another of Candler’s endeavours was the establishment of Methodist college, Emory College, later Emory University in 1836. Candler’s brother Warren was a Methodist Bishop, and he became the first chancellor of the new campus. In 1919 Candler sold the Coca Cola business for $25 million and devoted his time to philanthropy, giving generously to The Methodist Church.

The Coca-Cola Story, Graham McDonald for the DIDUNO Network

Your ticket for: Why does John Wesley’s New Room have an unopened Coke bottle in its collection