John Wesley’s New Room > News from The New Room > Friends > I vow to thee, my country

I vow to thee, my country

I vow to thee, my country, all earthly things above

Entire and whole and perfect, the service of my love;

That lays upon the alter the dearest and the best;

The love that makes undaunted the final sacrifice

And there’s another country I’ve heard of long ago,

We may not count her armies, we may not see her King;

Her fortress is a faithful heart, her pride is suffering;

And soul by soul and silently her shining bounds increase,

And her ways are ways of gentleness, and all her paths are peace. 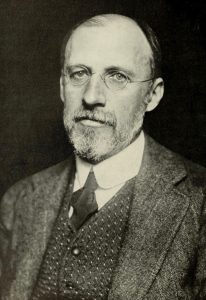 The original poem from which ‘I vow to Thee my country’ comes was called ‘Urbs Dei’ (The City of God’) or ‘The Two Fatherlands’ and it was written by a British diplomat called Sir Cecil Spring Rice. Born in 1859, he came from an aristocratic Anglo-Irish family. Spring Rice’s father died when he was just nine years old and he was brought up in his mother’s family home on Ullswater in the Lake District. He was educated at Eton and studied Classics at Balliol College, Oxford. Two of his closest university friends were Edward Grey and George Curzon. Grey became a prominent Liberal politician and a key figure in shaping the country’s foreign policy. It was he who famously commented on the outbreak of World War I that the lamps of Europe were all going out. Curzon became a leading Conservative who took on the role of Viceroy of India from 1899 to 1905 and later served in the War Cabinet. Spring Rice entered the Foreign Office and worked as a diplomat in various countries, including Japan, Iran, Russia, and Sweden. Between 1912 and 1918 he was the British Ambassador to the United States and he played a key role in persuading America to enter and so help end the First World War.

Throughout his life Spring Rice wrote poems. He wrote a first draft of ‘Urbs Dei’ sometime in 1911-1912 while he was working in Sweden and his aim was to express how a Christian owed loyalty to both his homeland and the heavenly kingdom. He revised the poem in 1918 when he was about to return to Britain and it had a first verse about the terrible carnage of World War I in which his brother Gerald had died and his desire to return home after years abroad:

I heard my country calling, away across the sea,

Across the waste of waters, she calls and calls to me.

Her sword is girded at her side, her helmet on her head,[11]

And around her feet are lying the dying and the dead;

I hear the noise of battle, the thunder of her guns;

I haste to thee, my mother, a son among thy sons.

Spring Rice died in Canada on his way back to Britain and the poem was circulated among his friends. The composer Gustav Holst was approached to write a tune to fit the words. He had a connection with Spring Rice because Holst’s daughter Imogen had been in the same class at school as the diplomat’s daughter. Holst decided that some of the music from the ‘Jupiter’ section of his recently completed suite ‘The Planets’ could be adapted to fit the words of the poem. The resulting hymn, which omitted the first verse of ‘Urbs Dei’, was first sung in 1921 and St Paul’s Girls’ School, where Holst was Director of Music, made it their school hymn. Holst’s friend, the composer Ralph Vaughan Williams, ensured that it was published in the hymnal ‘Songs of Praise’ in 1925. Holst named the hymn tune ‘Thaxted’ after the village where he had composed ‘The Planets’.

Holst’s marvellous music and the hymn’s patriotic content led to it becoming a popular choice for singing in schools and for any military or state occasion. It embodied itself into the fabric of the nation. The decline in Britain’s world role did not change that – as exemplified by the fact it was sung at the funerals of Winston Churchill in 1965, Lord Mountbatten in 1979, Princess Diana in 1997, and Margaret Thatcher in 2013. Amazingly its use extended into weddings, although the words seem hardly appropriate. A factor in that may have been that Princess Diana liked it and so had it sung at her wedding in 1981. The hymn is, of course, most associated with the observance of Remembrance Sunday. Soldiers very easily relate to its words because they are aware of the sacrifices so many soldiers have made and still make. It is therefore not surprising that the soprano Kathryn Jenkins often sang it when she undertook her special concerts to entertain troops engaged in the wars in Afghanistan and Iraq just as Vera Lynn had during the Second World War.

However, not all Christians approve of the words of the hymn. There is no mention of God (perhaps because it was written as a poem rather than a hymn) and they do not believe that Christianity should be promoting unstinting allegiance to the state. In 2004 Stephen Lowe, the Bishop of Hulme, hit the headlines by describing the hymn as ‘heretical’. He said he felt the hymn appealed to those who wanted to believe that Britain was a superior nation to all others and it was very wrong to promote that Christians should unquestionably support whatever their country said or did. This was said at a time when Britain’s decision to go to war in Iraq had created immense controversy. Many agreed with Lowe but the vast majority of people did not. He was accused of speaking only out of ‘political correctness’ and of belittling the sacrifice of all those who had given their lives in service of their country. It was said he was out of touch with the millions of people who loved the hymn. The following is pretty typical of the many letters that were sent to the newspapers:

Everyone I know chokes with emotion when they hear this hymn, it epitomises the very being of the Englishman and the Englishwoman… strong and enduring and loyal, yet gentle, caring and loving. We don’t have much left to be proud of now in England, but this hymn can stir up deep feelings of belonging.

In the wake of all this Martin Linton, the Labour M.P for Battersea, and the singer-songwriter Billy Bragg set out to write new words that they hoped would reclaim Holst’s wonderful melody from what they described as ‘blind patriotism and jingoism’:

We vow to build a country where all can live in health,

Where no child need live in poverty, where we will share our wealth;

Where we fulfil the true potential of each and every one

As democrats and socialists we hold this to be true:

From each by their ability, to everyone their due.

Of birth or disability, of race or sex or creed.

By the strength of our endeavour we can build the world anew,

And put the power in the hands of the many not the few.

For there is a simple principle that no one shall displace:

We are all alike in humankind, we are the human race.

Not surprisingly, some were quick to say that it was just as wrong for a hymn to promote socialism as to promote patriotism. Nevertheless, at regular intervals voices have continued to condemn the original wording. For example, Gordon Giles, the vicar of St Mary Magdalen Church in Enfield, campaigned against the hymn’s continued use in 2013, saying it was wrong in a post-colonial age to be still singing a hymn that was about fighting for King and country and so preserving an Empire. He also said it was ‘theologically inept’ to link surrendering one’s life for one’s country with worthwhile sacrifice if the cause of the war was just ‘wealth, power, influence, [and] national pride’. Suffering in that context was just ‘obscene’.

There is, of course, no denying that the hymn is very much a product of Spring Rice’s patriotism and his understandable desire to honour all those who had died fighting for their country. However, it is important to remember that the words were written by a diplomat who devoted his life to resolving issues through discussion and at a time when there were demands to create a League of Nations to end all wars. The hymn is not a militaristic one and there is nothing unchristian in saying that love is not love unless it is ‘entire and whole and perfect’ and in recognising that love can sometimes demand that a person should sacrifice everything in order to benefit the greater good of all. A speech he made just before his death seems to indicate that Spring Rice was thinking not just of soldiers but of Christ when he talked of ‘the love that never falters, the love that pays the price, the love that makes undaunted the final sacrifice’:

The ‘other country’ to which he refers is one that exists within the mind, heart and soul of a Christian and it is not governed by the might of armies or the pomp and ceremony of government. The second verse of the hymn is all about allegiance to the Kingdom of God and how its ways are ‘ways of gentleness’, a place where all paths lead to peace. Maybe therefore the Biblical text that is most helpful in deciding how one approaches the content of this hymn is Matthew 22 v 21 in which is given Jesus’ response to those who questioned where a person’s loyalties should lie: ‘Give back to Caesar what is Caesar’s, and to God what is God’s’. It’s a sentiment that Spring Rice would have endorsed.

Your ticket for: I vow to thee, my country

I vow to thee, my country