Francis Asbury And A Prayer For Mission 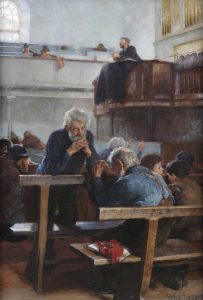 Holy God, you inspired Francis Asbury with evangelical zeal and he faithfully proclaimed the Gospel, changing the lives of many. Inspire us, we pray, by your Holy Spirit, that we, like him, may be eager to share your Good News and lead people to Jesus Christ; who lives and reigns with you and the Holy Spirit, one God, now and for ever. Amen.

John Wesley expected all those who became Methodists to engage in daily prayer:

“We have need daily to retire from the world, at least morning and evening, to converse with God.”

He also advocated prayer as an essential first step when facing a problem:

“On every occasion of uneasiness, we should retire to prayer, that we may give place to the grace and light of God and then form our resolutions.”

This approach was echoed by his brother Charles. One of his most famous hymns, ‘Soldiers of Christ Arise’ was in its original form an extensive mediation on the importance of prayer:

“Leave no unguarded place, no weakness of the soul,

take every virtue, every grace, and fortify the whole…

Arm yourselves with all the mind that was in Christ, your Head…

To keep your armour bright, attend with constant care,

still walking in your Captain’s sight, and watching unto prayer…

To God your every want in instant prayer display,

Not surprisingly as a Methodist Francis Asbury thought daily personal prayer was essential and every day he confessed his sins, thanked God, and prayed for the needs of himself and others:

“My desire is to live more to God today than yesterday, and to be more holy this hour than the last.”

He thought prayer should be a heart-felt conversation with God and never just a formality. Not long after he arrived in America he wrote:

“My present practice is, to set apart about three hours out of every twenty-four for private prayer; but Satan labours much to interrupt me; nevertheless, my soul enjoys a sweet and peaceful nearness to God, for the most part, in these duties.”

Asbury was well aware that he was following in the evangelical footsteps of George Whitefield, the great friend of Charles Wesley. His watchword was ‘Be Wholly for God’ and, like Whitefield, most of Asbury’s prayers centred on his desire for God to create a religious revival and his willingness to play whatever role God wanted him to play. Asbury wrote on one occasion that his faith had made him a happy man and that the only thing that really grieved him and made him at times downcast was that so many people had not yet experienced that happiness. He rejoiced whenever he saw lives changed:

“Men who neither feared God, nor regarded man—swearers, liars, cock-fighters, card-players, horse-racers, drunkards, etc., are now so changed as to become new men; and they are filled with the praises of God.”

And in a letter to a friend he shared his vision of a future America in which a religious revival had really taken hold:

“Oh, my brother…when the people in our towns and country assemble by thousands, and are converted by hundreds, night after night, what times!  Lord, increase our faith.  Nothing is too hard for him who made and redeemed a world.”

Like Wesley he urged those who responded to his preaching to rely on the power of prayer:

On one occasion he wrote in his journal:

“Prayer is the sword of the preacher, the life of the Christian, the terror of hell, and the devil’s plague.”

Today the Francis Asbury Society in America run a Prayer Chapel and invite people to submit prayer requests via their internet site.

Your ticket for: Francis Asbury And A Prayer For Mission

Francis Asbury And A Prayer For Mission